While many phone systems can route inbound calls, Salesforce-native Fastcall leverages critical data in Salesforce for call handling and call reporting. Phone numbers can be quickly provisioned and setup in minutes. No more waiting for a poorly integrated phone system. You will easily create a Fastcall Interactive Voice Response to perform certain actions, like playing a greeting, providing phone menu options and advanced flows for the call.

When an inbound call arrives to a phone number with an IVR assigned, the IVR instructions in Fastcall tell Twilio how to handle the incoming call. Your IVR might start with an optional greeting: “Hello, thank you for calling…” Depending on your setup, you might give instructions such as “Press 1 for a directory”. Other options include an IVR call transfer action which can route the call to a user, a group, or a fixed phone number. Once your IVRs are created, you can assign them to as many phone numbers as you require.

When using the Fastcall directory you can read all Fastcall users or chose a group. Keep in mind that users will need to have the extension set on their Fastcall user settings. 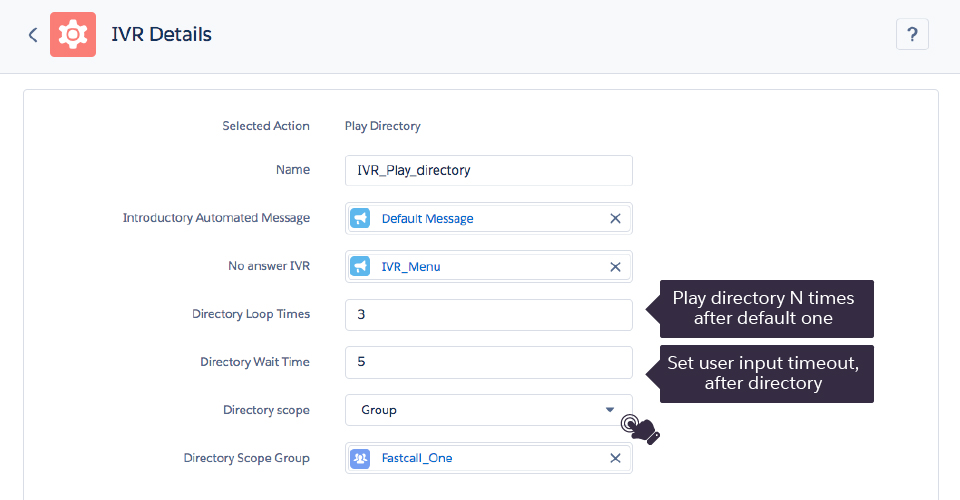 When you select call transfer as IVR action you will see the options below. 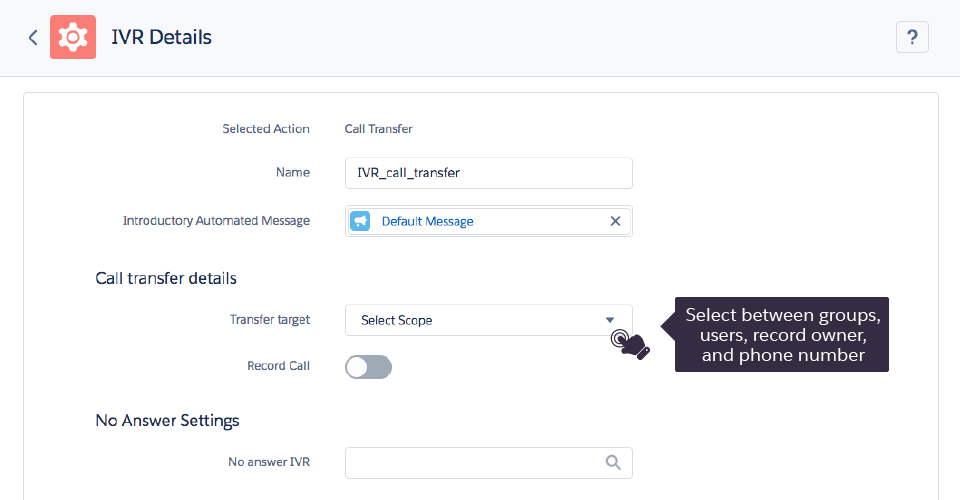 Fastcall users and groups are Salesforce’s Users and Groups with extra metadata relevant to our application. Groups are used for different purposes in Fastcall. Here we define users that will receive calls via the Fastcall automatic call distribution (ACD).

Fastcall supports three ACD strategies: round-robin, simulring, and queue.
When calls are distributed to a group of users, the default is a round-robin mechanism, where users are tried one after the other, and then again in the same order if no one answered. The users’ relative order is maintained between calls, however, the initial position/index in the list is shifted one place on each new call, so calls are distributed evenly over time. Users are removed from the pool when they answer a call and then added back once they complete it, so they are eligible to answer a call again. Selecting round robin you have to decide your round repeat times. Calls to round-robin ring users in the group. There is no hold. For example, if no users are available the call goes directly to the no answer IVR.

Simulring rings are users in the group at once. Be careful with this setting. Ringing too many users at once will train user not to answer the inbound call. Simulring also has limitations when combined with listen-in or a warm call transfer.

The third call transfer option is a queue. This option place calls on hold until an agent becomes available. The hold option plays music and we read the position in the queue.

The call transfer has a “no answer” IVR option, defining next steps to follow if the initial transfer doesn’t connect. Calls can be rolled-over to another group, sent to voicemail, or sent to a call center with a fixed phone number. Transfers can also be nested. You can move from group to group for example 2 users then 2 users.

Overflow routes all calls to a single number usually a call center or just a single phone in the office. This number is always available and does not go offline.

Users answer ACD calls on one designated call receiver which you add on the Fastcall user settings. This is different than settings for users phones where options include simulring and overflow. The call receiver can be the Fastcall softphone or a hard phone. We do not recommend a mobile phone with the Fastcall ACD. Available users will receive calls. Users who are on active calls or offline, will not.

The Fastcall menu presents a set of options each mapped to another IVR. You can create a menu hierarchy that can be navigated by pressing digits, with some options linking to sub-menus, and another linking to a transfer, voicemail, etc. Example: “Press 1 to hear a directory, Press 2 to transfer.”

The menu option requires the 2nd level of IVRs and these children IVRs must be created first.

The timeout setting defines how long to wait for user input; repeat intro message tells the IVR how many times to play the message. When these time out,  we proceed with no answer IVR. If the no answer IVR is empty the call ends. The IVR will accept the user’s input before the message is finished.

Set a greeting and this IVR records voicemail. A voicemail record will be created and related to the call, with the URL of the recorded audio message in a custom field that you will add to the page layout. The voicemail owner can be a user or a Salesforce queue.

The messages that are used for IVR or voicemail can be text to speech (TTS), messages can be recorded by phone in Fastcall or you can add a URL with an audio file as a recorded message (for example a Dropbox URL with a recorded MP3 file). 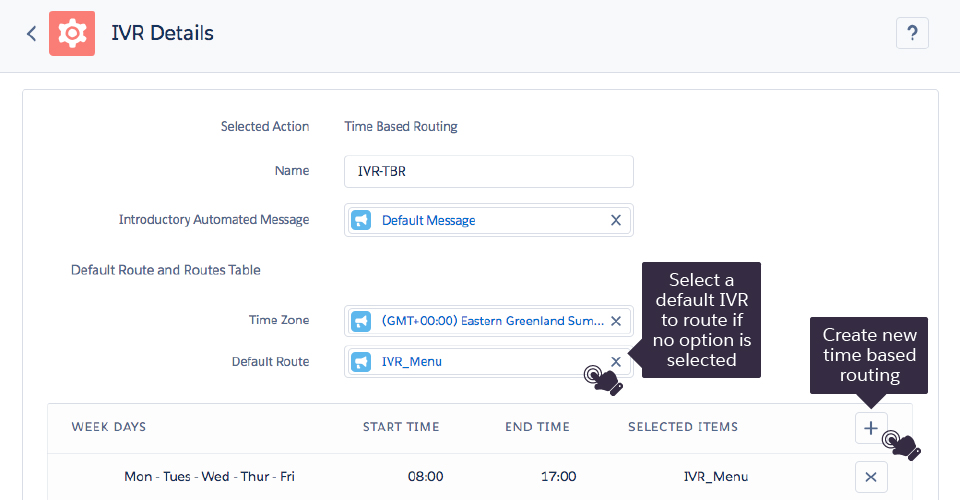 TIP: We advise that you start with time based routing so that calls received after hours are either sent to an overflow call center or voicemail. Otherwise, these after-hour calls will be reported as missed.

You can route calls based on the time of the day. To start, you specify a time zone and a default route. Calls that do not fall inside any of the defined periods are routed to this IVR. Then you can define time periods, by means of a start time, end time, and days of the week, and map each of those periods to a specific IVR. You are creating two or more paths. During business hours follow this path; and after hours follow that path. The IVR used within the time band is located inside these settings.

To help you manage the configuration for your different call processes, we introduced IVR Flows, which gather together the IVRs belonging to the same business process.

If you need a complex IVR setup for your organization, we recommend you use IVR flows. An IVR flow groups a set of related IVRs, to better identify and manage different actions, reducing complexity.

Actions are IVRs that can be used directly and included in multiple business processes. For organizations with simple processes, configuring IVRs as individual actions is OK.

By default Fastcall will create a native Salesforce closed Task for each inbound call whether to a user-assigned phone or an IVR. We give the option to create an open Task for a missed call, and/or voicemail. Fastcall reports for inbound calls include:

Fastcall inbound calls are logged with the caller ID, the status (answered or missed), and a lookup to the dialed phone and/or IVR used. We report the user who answered the call on the Salesforce “Assigned To” field. For basic inbound calls, the Salesforce Task may be sufficient.

The Fastcall custom objects for calls, connections, connection attempts and voicemail are helpful for more advanced IVR reporting. While a standard call has one connection, inbound calls routing through the IVR and transferred using our ACD may have many call attempts. Our data model and custom objects will report this.

Fastcall interactive voice response will give more detailed inbound call information on our custom objects. Each call to a Fastcall phone number creates a call record. If the phone number is associated with an IVR, the name of the IVR is tracked in the connection. Calls may have multiple connections. Each call transfer creates a connection, for example. Within connections, each attempt on a user creates a connection attempt. Fastcall reports this in a custom report: Calls, Connections, and Attempts. We report wait times, durations, users and a lookup to the IVR that received the call.

Ready to start the Free Trial?

Provide your information and install the package in your Salesforce Org.

Please enter your email to join the Fastcall Appexchange

Schedule a Demo With The Fastcall Team

Chat with an Expert

Fastcall is available for chat in the: